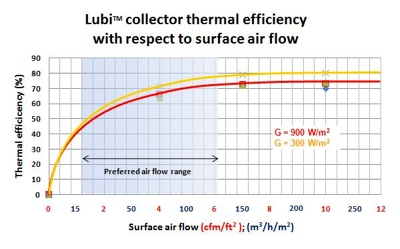 The LubiTM solar air collector reaches its maximum efficiency at 80,7% which is the highest figure ever reached by a single?pane solar air heater. The biggest benefit, however, is that this high performance is maintained over a very wide range of air flow rates. Whereas traditional solair air collectors, glazed or not, suffer from a loss in performance with air flows lower than 5 cfm/ft2 (100 m3/h/m2), the LubiTM solar air collector curve remains as high as 55% with air flows as low as 2 cfm/ft2 (40 m3/h/m2).

This allows for a substantial temperature increase as high as 45oC (81oF) above ambient, which makes the LubiTM solar air collector ideally suited for all solar air heating applications such as building space heating, coupling to heat pumps, industrial or drying processes and, of course, preheating of outside air.

The basic principle of the LubiTM system is to reduce the heat losses to the environment, which are a common feature of all glazed solar air collectors. This is attained by means of the multiple perforations spread across the entire glazing surface through which incoming outside air is admitted. The underlying operating principles governing the transformation of incoming solar rays into useful thermal energy are as follows: 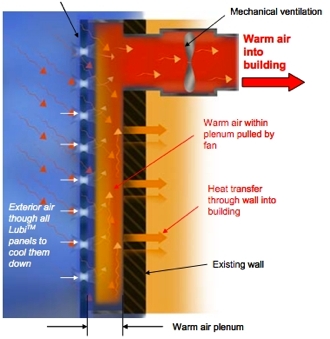